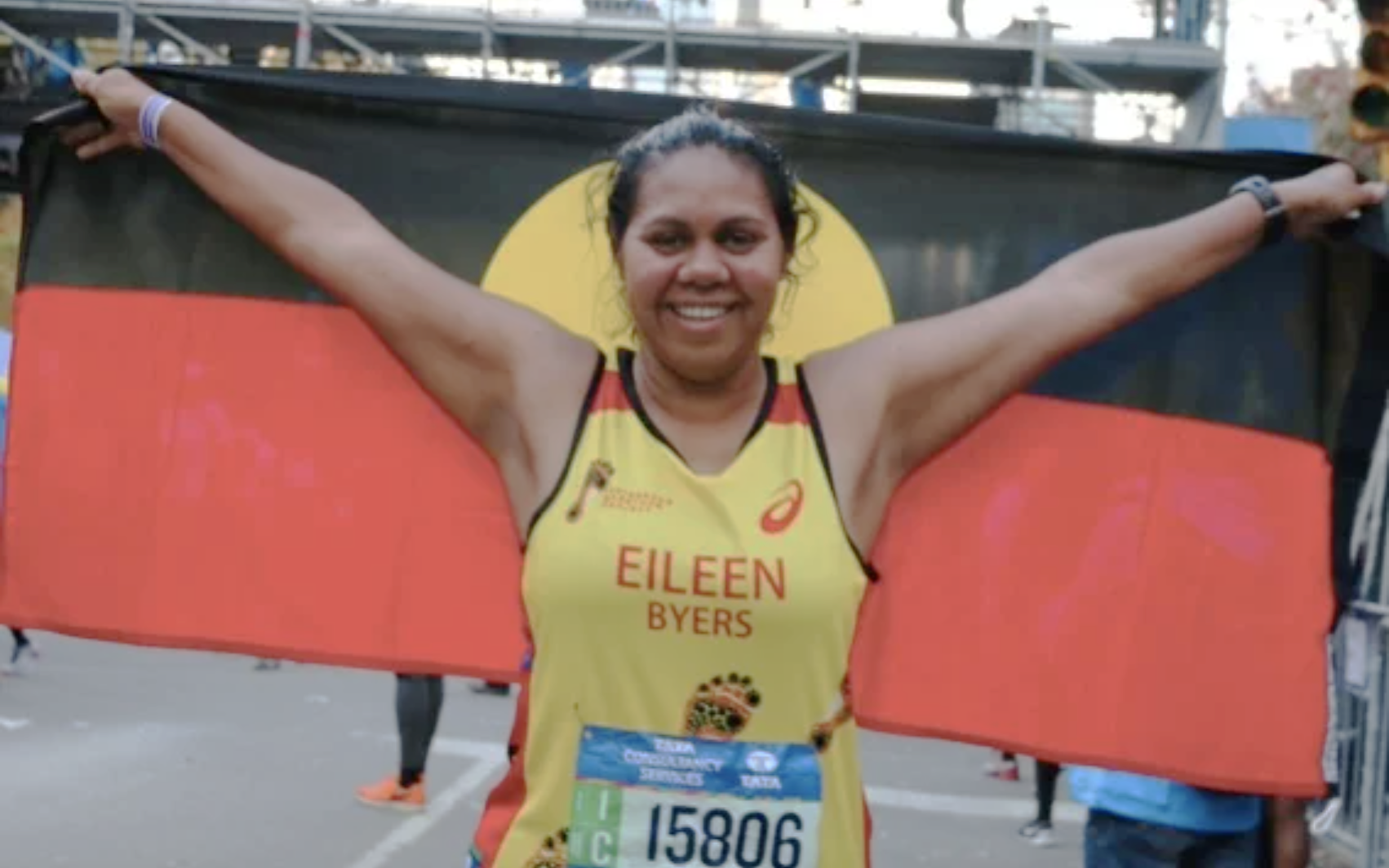 Eileen is a Bundjalung/Wakka Wakka woman and mother of four who wants to inspire other mothers in her community.

She wants to create an active community to combat the high incidence of obesity and hopes to help educate people in her community about how to live fitter and healthier lives. Eileen is an incredibly strong, resilient and determined woman who is determined to be the change she wants to see in the community. Eileen would also like to establish a local walking/running group and encourage members of the community to get involved.

Read this interview by Marie McInerney in Croakey.org

Not too many years ago, Eileen Byers was overweight, drank more than she should, smoked, and suffered deep anxiety.

In 2015, however, she ran the 42-kilometre New York Marathon, part of a select team of Indigenous athletes trained for the event by former Olympian Robert De Castella and the then Head IMP Coach Mick Rees.

“Twelve months ago she told me all the things she couldn’t do,” Rees told Croakey. “Now she’s a superwoman.”

The presentation earnt her a standing ovation from delegates, whose ranks she joined earlier this year when she was appointed as an Aboriginal health worker at the Walgett Aboriginal Medical Service, 600 kilometres from home and her first job since she was 18.

A little nervous at the conference, the 31-year-old let her inspiring slideshow do most of the talking but she gave more details in this post, published at the ABC as part of a series about her preparation for New York. In it she said:

“Back in January 2012 I was unfit, overweight, hadn’t worked since I was 18, I’d been a mum since I was 15 and I was struggling with alcohol abuse and low self esteem. I was so so timid I was too scared to apply for jobs or do any courses to improve my situation.”

Then I met my current partner in March 2012 and I got a glimpse that I could make a change. He was a healthy role model and so when [he] got a job working on an outback station, I made a decision to show him I could also be healthy. The kids were all at school and I had loads of free time so I took myself off to the gym for my own personal makeover. I was 89 kilos and surprised myself when I dropped 18 kilos in just 16 weeks.

But then when he returned we decided to have baby and within weeks I was pregnant. By the time I had our baby I’d crept up to 103 kilos.”

In December 2014, Byers saw a Koori Mail advertisement from the Indigenous Marathon Project (IMP), which every year selects a group of young Indigenous men and women to complete the New York City Marathon with just six months of training.

It uses the marathon as a vehicle to promote healthy lifestyles to Aboriginal and Torres Strait Islander people and says it “uses running to change lives”.

There was just one problem.

The only running I’d ever done was on a netball court and running after my kids.

Still, she applied and headed for an IMP trial day at Coffs Harbour. She finished the three-kilometre course, but mostly walking. She could only run in spurts between pain and cramps, and didn’t think there was a chance she could qualify.

But, as she said in the blog post, she also had a one-on-one interview with coach Mick Rees.

“Mick Rees wanted to know why I wanted to be part of the IMP team. I told him everything … the drinking, the smoking, the unemployment, the teenage mum, being unfit, overweight, my learning problems … and being over it all, over my life and wanting a change.

He then asked me what being in the IMP would do for my life. I told him I wanted the opportunity to train as a fitness coach and that it would challenge me out of my very unhealthy, comfort zone – physically and psychologically.

Then the crunch question, he asked “what would I do for my community?” I said “ I want to be a role model in my community, for anyone who wants or needs it, and because of my experience as a teenage mum, I also want to help young mums to live a happier, healthier lifestyle.”

Rees told Croakey that he had deliberately set the trial on a waterlogged oval across the road from the athletics track, to see how the candidates responded to tough conditions. He said he gave Byers every opportunity to quit. “I was saying ‘you can pull out if you want’,” he remembered. “She just wouldn’t stop.”

He said: “After seeing what she did and hearing her speak in the interview, I saw an unbelievably tough and resilient woman who had just never been given an opportunity. All she needed was an opportunity to showcase her resilience.”

A month later, she got a phone call to say she was one of 12 from across Australia who had been selected for the 2015 team. Click here to continue reading Eileen’s amazing story in Crokey.org.