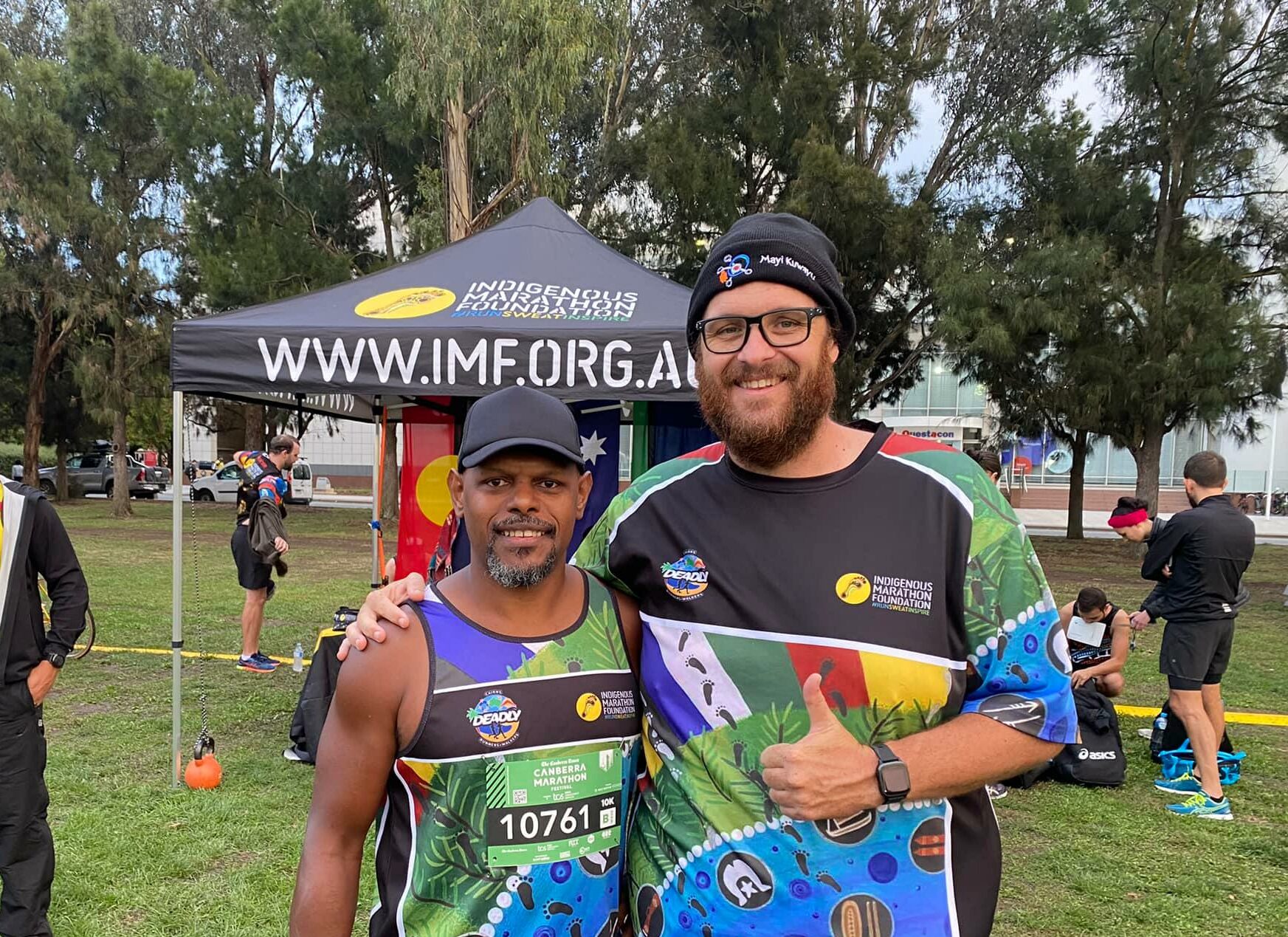 Nathan Schrieber is a Gunggandji man who runs with purpose.

After re-establishing the Yarrie Runners and Walkers program, an extension of the Indigenous Marathon Foundation in Yarrabah, Nathan shares his vision for the group with offsider and fellow runner/walker Peter Gavel, and his experience of reconciliation in action through IMF RAW.

Nathan started running roughly six years ago after trying to get his son into team sports. He knew the physical and mental benefits of exercise and wanted his family too to reap these rewards. It wasn’t until they attended a running session with Cairns IMF RAW that they found a sport his son was interested in, and a sport they could enjoy together as a family.

“My son fell in love with it. At the end of the first session, he asked me when the next session would be,” says Nathan. “It was perfect. My partner and three kids could all turn up together and exercise for half an hour. It was something we didn’t need a babysitter for”.

Nathan reflects on the power of running, sharing that you don’t need to compete with anyone else. “You run to better yourself and beat your own time. It’s more of a personal incentive”.

“I’ve ran with IMF RAW for roughly six years. Over that time, I’ve watched the group fluctuate in size. I’ve ran with mob that I know and have met so many new people. The beauty of participating is it’s up to you. You turn up when you can and improve as much as you want”.

When asked why he continues to run, Nathan credits the encouragement he has received along the way, and the ability for him to model positive actions and lead by example.

“Throughout IMF RAW, we are reminded it’s not about winning. It’s about our own personal achievements and our own wellbeing. I’ve had a few challenges along the way. I have lost family members; young family members and running has driven me to be a positive role model to our younger generation. Growing up I always looked to my cousins and uncles for an example to follow, and now I am that example,” says Nathan.

“We have the ability to make positive choices. I want to be part of the narrative of changing the way we talk about health. Sometimes I sit down at family BBQ’s and tell my family I’m training for an event. They are surprised at the distance and tell me it’s a long way, but I remind them it’s just putting one foot in front of the other.”

Nathan shares that there was an IMF RAW group operating in Yarrabah about four years ago under the guidance of a local teacher, however the group was discontinued after the teacher left the community.

“Prior to the run leader leaving, we had a really strong foundation and a good mix of staff both Indigenous and non-Indigenous, and community members. Kids always turned up to run too. Since that time, community have been asking what happened to the program”,

“[Fellow run leader] Peter Gavel and I travelled to Canberra earlier this year to participate in the IMF RAW Run Leaders Symposium to become qualified run leaders and take that back to community”,

“We have only just started the group. We train one day a week and will be driven by community to see what they need and what works for them. We will try our best to accommodate for what the community want. Right now, we operate in one suburb in Yarrie but will look at the possibility of running in other suburbs.”

In line with National Reconciliation Week and this years’ theme Be Brave. Make Change., Nathan reflects on the reconciliation in action he has witnessed through IMF RAW.

“To me, it aligns with the way our old people think. In order to move forward, you need to have everyone’s voice at the table contributing and moving that group forward.  That’s what I see with IMF and IMF RAW; you’ve got representation of people that are all really good at what they do, and they are all combining to move forward in a positive way”,

“One thing that our old people have always reminded us of, is if we all come and sit around one fire and bring an attitude of trying to move forward together, then we will see positive improvement”,

“I’m thankful for the IMF and the Indigenous Marathon Project (IMP) Graduates like Nadine Hunt and Harriet David who have stood up and made a change in establishing running groups and laying a good foundation for the next generation coming through”,

“I’m proud to establish this group in Yarrabah and hopefully over the next few years we will get some IMP Graduates from Yarrie”.

IMF RAW is a free, safe, and inclusive grassroots community-led and volunteer run movement in over 40 Indigenous communities across remote, regional, and urban Australia that aims to make running and walking a normal and everyday activity for all.

For more information about Yarrie Runners and Walkers and to keep up to date, visit their Facebook page.

The Power of Running